http://www.ysl.com/us/shop-product/men/shoes-french-booties-french-85-double-buckle-ankle-boot-in-black-leather_cod44838530mq.html#dept=shoes_men_&itemPage=2
This topic came about at my day job. Surrounded by clothes that’s 98% of our daily conversation, and these Giuseppe boots were the topic of conversation, but I was trying to make a point, and a coworker of mine said that he doesn’t like a heel? I stated that Saint Laurent boots have heels on them and he proceeded to say that “he doesn’t like those either”. So that leads me to today’s topic. Are those heels on Saint Laurent boots too high for men? Keep in mine most of their boots have that biker/cowboy boot heel to them. In the same breath they also produced boots with the height of a women’s heel. I wonder how the European mind feels about this topic. Do they thrive in Saint Laurent? Is it the Ralph of their community? Do they embrace the brand and it’s love of high heels for men? 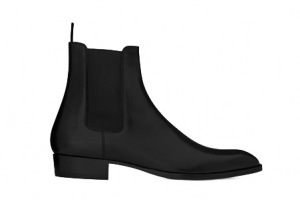 When is too much; too much? Or is that an American testosterone and estrogen feeling? I say that because the men overseas are much more into fashion than American men are. It’s easily proven being tha menswear fashion week is held overseas and not here in the states “until this summer that is“. Still does the heel on Saint Laurent boots make the men less masculine or does it take a certain man to wear the shoe i.e Lenny Kravitz but it is because of his image of being a rocker make it acceptable for him? What about the average joe who isn’t into rock n roll, and the guy from the small town of 4500 people or let’s even say 50,000 still a small community in my opinion. Could he get away with it? Or is this a topic of how comfortable you are in your own skin? Saint Laurent isn’t making men feminine in my opinion. People attach genders to everything, which in society eyes makes it feminine or masculine, even I describe things as masculine, that’s life. Lets talk, out of the shoes presented which one is the most feminine. Wait now, your opinion may be screwed by the way you were raised. Ding ding that may be it! If you’re a city boy or from the north period, the heel on a boot may not bother, but if you’re from a small town or even down south period; you may see things differently. I think the men of the south are a bit more closed-minded when it comes to Fashion. Of course that may be due to generations and generations of having to be the toughest you can be. So any heel may be a no-no. As opposed to those from up north who venture into just about anything because things are just that free. 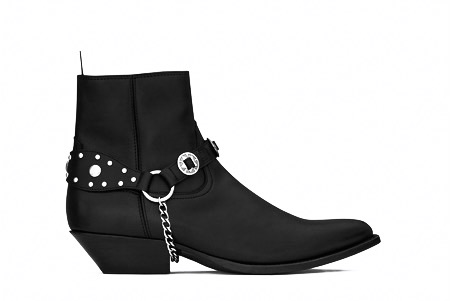