Now imagine my excitement when I received an email saying that Clarks wanted to work with me! This is my second shoe collaboration, and within a five month period at that. Here’s a little fact! I had such a hard time deciding between two different shoes that I went back and forth over and over again, until I finally let her know that I was having the hardest time deciding, and she fixed the problem for me by providing me with both of the pairs I was at a quandary about. Upon deciding what I was going to pair with the denim and tan wingtips I tried on many options. Okay that’s an exaggeration it was more like three options obviously these shoes were made to be worn with denim, but I needed a denim pair of jeans that wouldn’t hide the detail on the shoe, but one that also complimented the color as well, and had the fit I wanted. I went with my favorite pair of denim which is now a waxed denim thanks in large part to heavy starch. Once I found my denim, I needed to come up with the top half of my look. I went with a brown tweed blazer, with a v-neck tan sweater, and a chambray button up with a navy blue knit tie. Topped off with an abrasive oversized blue knit scarf that was really the shoes competition. Here’s how day 1 went. 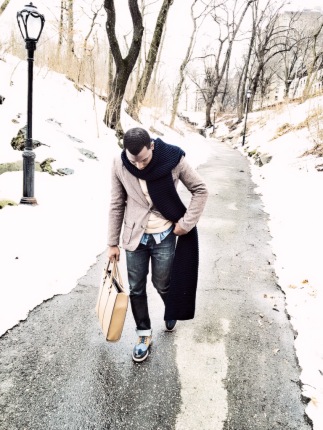 It was a Saturday that I decided to venture out into the city with a friend to do some shopping and eating of course. Chelsea Market was our first stop and while there I discovered so many hidden gems that I just didn’t know that I was missing out on. Now one would think being on your feet all day in wingtips would actually be quite painful, but to my surprise the sole on this particular pair of shoes actually provides more of a cushion, and I think that’s because it’s more of a platform rather than just a hard bottom shoe. Two reasons why I love that feature; hello with the first one being I can walk around in them all day without causing my pinky toe to hate me, and secondly it adds more height to me, because being 5’7 at most isn’t always the most fun duty especially when you want to see over people I’m not complaining though I’m just saying.